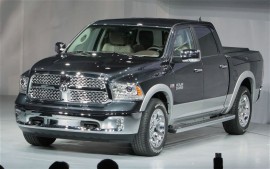 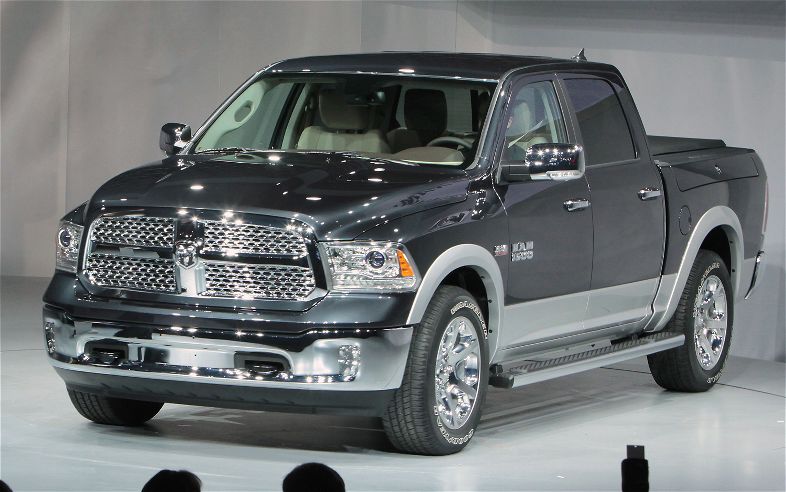 The process of continuously improving the Ram takes a big step forward for the 2013 model year, with major styling and powertrain upgrades aimed primarily at improving fuel economy and refinement. Changes under the hood of the 2013 Ram 1500, which is making its debut at the 2012 New York International Auto Show, include replacing the old 3.7-liter V-6 and 4.7-liter V-8 engines with the popular Pentastar 3.6-liter V-6. The 5.7-liter Hemi V-8 with cylinder deactivation tops the range.

Either Ram engine can be paired with an eight-speed automatic (a quasi-six-speed with ultra-closely spaced fifth and sixth gears remains standard). Auto stop-start technology is available with either engine when paired with the eight-speed transmission, and uses a stronger, more durable starter and battery. Electric power steering is now standard, and that giant grille — sized to cool an engine climbing the steepest grade towing the largest trailer — gets shutters that remain closed most of the time to dramatically reduce aerodynamic drag, in conjunction with a new flexible rubber air dam and an optional four-corner air suspension adapted from the Jeep Grand Cherokee, which allows the truck to hunker down at highway speeds. A transmission-fluid heating system helps achieve the optimal 190-degree F operating temperature more quickly to reduce friction. The range of available axle-ratios shifts in the economy direction from 3.55-3.92:1 to 3.21-3.55:1, and smarter “pulse-width-modulation” of the fuel pump and cooling fan motors ensures they work only as hard as necessary to get the job done. Along with small weight reductions and an upgrade to the brake system that backs the rear pads away from the rotors (as the fronts have for some time), the new Ram is expected to post best-in-class fuel economy figures.

The 2013 Ram’s new optional air suspension handles load-leveling duties and rises to five heights: two off-road tippy-toe settings, normal, aero (for highway-speed driving), and a kneeling position that makes it easier to load people and cargo. No capacity figures were provided (manufacturers like to wait until the start of production in case they need to tweak the numbers to trump the competition), but we’re promised the load-carrying and trailer-tow ratings won’t be reduced for the air suspension. Company officials also promise that rigorous development testing ensures the rubber air bladders will last the useful life of the truck, but while I’ve seen original coil springs last 80-100 years, I haven’t found many 50-year-old air springs still riding high.

Design-wise, the Ram’s new shuttered grille is an inch taller to incorporate the trapezoidal corporate look, and the lamps and one-piece chrome bumper are modified to match it. Vertical foglamps put out more light than before, and the tow hooks are repositioned in openings that make them simpler to access when needed. The wheels and taillamps are also revised, with LED lighting distinguishing the upper models (along with wheel styles and grille-inserts). Vertically stacking the Ram 1500 door logo leaves more room for business signage. The Rambox option will be offered on 80 percent of the models, and the boxes (and tailgate) are secured with the central locking system. Optional running boards with Ram logos on their end caps will extend from wheel to wheel, making it easier to access the bed or Ramboxes and improving aerodynamics as well.

Interior enhancements include soft trim on the armrest with leather decor inserts on top models, and an upgrade to an 8.4-inch full-color control screen in the center stack and a 7.0-inch one in the instrument cluster. Eight-speed models get a rotary E-shift gear selector on the center console, with range-select buttons (to limit the top gear ratio) on the steering wheel. UConnect is upgraded to accept downloadable apps and to provide a mobile WiFi Hotspot via embedded cellular technology. The integrated trailer-brake controller moves over to the center stack, where it’s easier to see and reach, and now includes programming to better interface with the latest electro/hydraulic brake systems used on the biggest trailers.

The extent to which the Ram has been revised after four years on the market indicates the market significance and level of competition in the full-sized pickup segment. Based on this first look, the Ram should be a strong contender for our 2013 Truck of the Year honors next February.