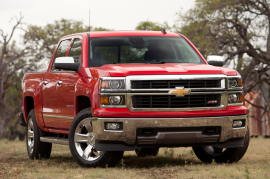 No one’s underestimating the importance of the all-new 2014 Chevrolet Silverado. While General Motors continues to shovel the current generation off dealer lots at an impressive pace, it would be too kind to simply say the old mule has started to show its age. The GMT900 platform that’s rolling along under the 2013 model has been underpinning fullsize GM trucks since 2007, and while the Silverado has stayed competitive through most of the intervening six years, the past two haven’t been kind to the machine.

Ford just won’t quit sharpening its F-150 in one way or another, throwing interior and driveline updates at the stalwart pickup with the fevered pace of a company possessed. Like the Silverado, the F-150 is no fresh piece of hardware, but fuel-efficient and powerful engine options and a well-sorted interior put the truck consistently ahead of the now aged Chevrolet. And then there’s the Ram 1500. Chrysler let loose with both barrels with the 2013 update, tearing into the fullsize market with a beautiful cabin, excellent tech and plenty of clever engineering.

Chevy engineers stood back and watched this happen, biting their tongues and whittling away all the while on the next-generation 2014 Silverado. There are only a handful of carryover parts from old machine to new, and the result is a pickup that offers more power, efficiency and refinement than the previous generation while holding the pricing line. This is, without a doubt, the best Silverado ever built, but does that make it the best pickup?

Park it beside its forebear and the changes immediately present themselves as substantial.

When the new Silverado first bowed at this year’s Detroit Auto Show, the truck faced a chorus of moans. Critics said the design simply wasn’t revolutionary enough to carry the machine forward, but park it beside its forebear and the changes immediately present themselves as substantial. The half-ton pickup now wears the bold, vertical face of its heavy duty predecessors, complete with an all-aluminum hood boasting a set of twin power domes that stretch from cowl to grille. As a result, the Silverado looks considerably less pokey than the previous truck from head-on. Throw in those handsome projector headlamps and the black two-tier grille of our Z71 tester and the new model looks both clean and modern without turning its back on the nameplate’s history.

The 2014 Silverado is now 0.4 inches wider than before, and that small nudge in track helps give the machine a more planted look. Designers took advantage of the added width by slathering the sides with massive, exaggerated fender swells. The squared-off wheel arches of the previous generation have stuck around, but the look makes sense paired with this more angular design. The inset doors help give the truck a more modern, clean appearance from the side, while smaller Z71 badges show Chevy is capable of demonstrating some restraint when it comes time to apply stickers.

The tailgate now features a torsion spring that cuts the effort of closing it by half.

While base models ride on attractive 18-inch polished aluminum wheels, our tester came saddled with hefty 20-inch chrome rollers. The Z71 trim affords buyers Goodyear Wrangler all-terrain tires, no matter the wheel size. The rubber lands more on the civilized side of the all-terrain spectrum, but makes sense for a truck that will likely spend the majority of its time on paved surfaces or light gravel roads.

Move to the rear and the Silverado shows off a massive Bowtie badge as well as a standard corner step bumper in LTZ guise. The bumper offers a foothold for climbing into the bed, and engineers reworked both rear stake pockets to accommodate a gloved hand for an easier, more secure way to get to cargo. More importantly, the tailgate now features a torsion spring that cuts the effort of closing it by half. Opening the tailgate is as simple as unlatching the lock and letting it drop. The spring gently lets the whole contraption down and into the open position without any help. We owe whoever came up with that one many, many beers. The design is brilliant.

The Silverado still finds itself half a step behind the Ram 1500 in both material selection and fit and finish.

But it’s indoors where the 2014 Silverado really differentiates itself from its ancestors. Here, designers finally gave the truck some much-needed attention. The dash is both more attractive and better thought out than before thanks to a simple-to-use center stack. Buttons and dials have been kept to a minimum, and those present are easy to locate and read at a glance. All of the controls have been moved higher up on the dash than before, and those that are set low are still within arm’s reach without having to lean forward or take your eyes from the road. We love the big piano key toggles for traction control, cargo lighting, lane departure and the like.

That’s not to say everything’s rosy indoors. The Silverado still finds itself half a step behind the Ram 1500 in both material selection and fit and finish. Where the Ram interior feels substantial no matter where our fingers land, the Silverado comes up short with a cheap-feeling, rubbery dash and arm rest covers. Add in a few unsightly gaps between bits of plastic trim and a slow, unresponsive MyLink screen, and it would seem there are still some specters of the old truck floating around inside.

But the driver gets a more substantial steering wheel with new redundant controls, and the redesigned gauge cluster is both good-looking and easy to read. The big, clear TFT screen mounted between the tachometer and the speedometer delivers a spate of vehicle information, from fuel economy and trip readings to the status of the engine’s cylinder deactivation.

Rest assured: It won’t be long before we see a new transmission snugged into the Silverado.

Speaking of cylinder deactivation, GM threw every efficiency trick in the book at the new EcoTec3 engine family. In addition to active fuel management, which can drop from V8 to V4 power to save fuel, the engine now boasts a direct-injection fuel system and variable valve timing for the first time. As a result, this is the smartest 5.3-liter V8 to ever find its way under the hood of a Silverado. With 355 horsepower and 383 pound-feet of torque, the engine delivers 40 more horsepower and 48 more pound-feet while returning 16 miles per gallon city and 22 mpg highway. That’s an increase of 1 mpg in both categories over the comparable 2013 model.

Strangely, that new lump is bolted to the company’s old six-speed automatic transmission. While the gearbox still performs as admirably as ever, we can’t help but think GM missed some efficiency here by opting to go without an eight-speed gearbox. Why stick with the old slushbox? Engineers had to choose where to put their cash for the new generation, and they chose to spend it on nearly every other aspect of the chassis, cab and driveline instead. Rest assured: It won’t be long before we see a new transmission snugged into the Silverado.

This is the quietest truck on the road, hands down.

On the road, the 2014 model is a few millennia ahead of its predecessor. The cabin is phenomenally quiet thanks to a cornucopia of tricks. The frame is both lighter and stiffer than before. Crew and Double Cab models boast both sheer and hydraulic body mounts to banish solid axle freeway hop. Acoustic fender liners keep tire noise at bay while triple door seals make wind noise an unpleasant memory from this truck’s past. Throw in spray-in sound deadening along the firewall and transmission tunnel, and this is the quietest truck on the road, hands down. There are luxury SUVs with worse noise, vibration and harshness characteristics.

Unladen, the 5.3-liter V8 delivers excellent power, hustling the truck to 60 miles per hour quicker than should be feasible. Shifts from that old six-speed are solid and well sorted, but the Silverado offers a more pleasant surprise in the brake system. While the 2014 model technically uses the same size stoppers as before, the entire system has been recalibrated. As a result, the pedal feels more confident with positive bite and excellent response. Considering the previous generation had all the stopping prowess of a hog on ice, the change is more than welcome. The rotors now use GM’s Duralife coating, which helps keep rust at bay and significantly increases rotor life in the process.

Depending on configuration, the 2014 Silverado will be able to tow up to 11,500 pounds safely.

GM has also done an excellent job of implementing an electronic power steering system on the 2014 Silverado. The wheel is perfectly weighted, and while it isn’t the most communicative tiller on the planet, it’s a step up and over the over-assisted hardware found on the Ram 1500.

Throw 5,000 pounds worth of empty horse trailer behind the Silverado and you’ll never know it’s there. Chevrolet says that depending on configuration, the 2014 Silverado will be able to tow up to 11,500 pounds safely, and engineers worked to make the truck more stable while doing so (for the record, as optioned, our tester could only tow a maximum of 9,600 pounds). While the marginally wider track is part of that recipe, so are new wheels and higher specification tires with stiffer sidewalls to reduce squirm and wander under a load. Of course, a number on a page hardly tells the whole story. Like most tow ratings, the closer you get to the ceiling, the harder the truck has to work. We put 8,600 pounds of trailer and skid steer behind the new Silverado, and while the truck could confidently pull the load about, we’d think twice about knocking on that 11,500 number’s door.

Chevy managed to hold the line on pricing for the truck, which means every MSRP is a carryover from 2013.

If you’ve hung around this long, you’re probably wondering exactly how much jumping on this ride will cost you. Chevy managed to hold the line on pricing for the truck, which means every MSRP is a carryover from 2013. Our fully kitted Crew Cab, four-wheel-drive LTZ Z71 tester pegged the meter at $50,910 including a $995 delivery fee. We likely don’t need to tell you that the bottom line is well into three-quarter-ton territory. Back off of nonsense options like the $1,395 20-inch wheels, $700 step bars, $995 power sunroof and other goodies, and the price falls off with a quickness. A no-option LTZ Z71, complete with leather seats and all the trimmings can be had for $43,165, plus destination.

That’s still a sizable stack of pennies, but it’s a good bit more reasonable. Step down from LTZ guise, and the truck gets more affordable still.

GM has done a damn impressive job with the 2014 Silverado, building the truck back into the contender it once was. The remarkably refined driving dynamics and quiet cabin are enough to earn it a special place in our hearts, and the stout aesthetics, refined V8 engine and sharpened interior all help put the truck ahead of the F-150 once again. But the Ram 1500 still offers buyers better in-cabin tech, clever fuel-saving tricks, the class’s best interior as well as the option of a small-displacement diesel engine. The new Silverado will certainly help convince longtime fans to hang around, but it may not be enough to keep wandering eyes from strolling toward a Ram 1500. Now we just have to wait and see what Ford has in store for the upcoming F-150.