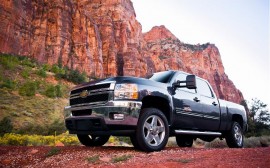 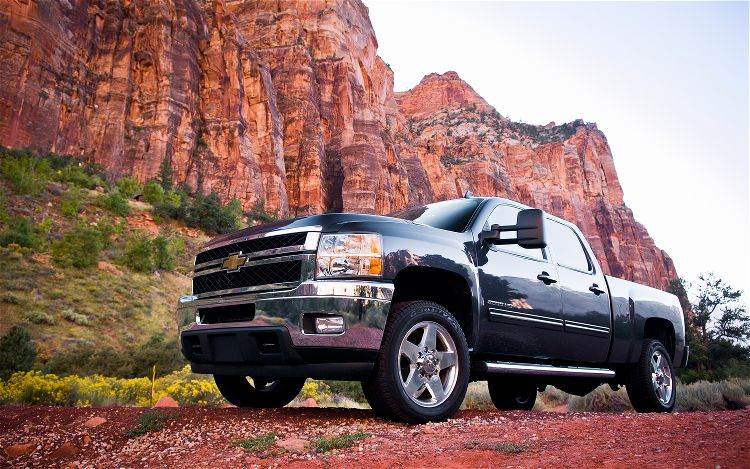 Over the last several months, we’ve remained impressed by the capability of the long-term Silverado. It gets up to speed on freeway onramps like a startled animal. It’ll carry just about anything this staff needs, and the truck doesn’t even seem to notice when there’s a lot of weight in the bed. It’ll effortlessly tow a large trailer as well. So, as far as its basic truck abilities are concerned, the Silverado nails it. What we have noticed, though, is that when it comes to the little details, the HD is still somewhat lacking. Fortunately, many of these gripes are minor, and almost all of them can be fixed with a revamped interior.

For starters, as pointed out by production manager Kirill Ougarov, because of where the four-wheel-drive selector knob is located, the left side of the steering wheel blocks the driver’s view of it. Since that’s the only place where there’s a light to indicate whether the truck is in two-wheel drive or in high-range 4WD, it would be nice to be able to see it. Either moving the knob to make it easier to see at a glance, or adding an indicator on the dash would help. We also wish there was a gauge to display how much diesel exhaust fluid is left (see below). Smaller complaints: it is pretty silly that if you are listening to an iPod, you have to actually push “Eject” to safely remove it. Also, the navigation system is in need of an update. For those who don’t understand the icons on the buttons in the driver information center, they can be counter-intuitive (there’s something that looks like the road leading into the horizon on one button, three squares and lines on another, etc.), but if you push the buttons enough times, you’ll start to figure out what each one does. One thing that requires no changes, though, are those seats. They are plenty comfortable for long drives, and it’s easy to get spoiled by the seat heaters.

We took the Silverado in for its 15,000-mile service, and when we first brought the truck in, the estimate was for over $400 because it included a throttle-body cleaning. That was a red flag, because it didn’t sound like a regular part of the manufacturer’s list of items to do for the 15,000-mile service; and it seemed pricey. But, fortunately, the dealer inspected the throttle body and found that it didn’t need cleaning after all — and I didn’t need to argue with them about the cost. That brought the total down to $263.48 for service. While it was there, we also asked the dealer to measure the amount of DEF that was still in the tank. We asked, knowing the truck was going on a long drive while towing, and it would be better to know ahead of time, as opposed to waiting until the notice came up on the digital screen in the gauge cluster. However, the dealer was no help; they just said to wait until the display showed that the level was getting low. That’s why this truck needs a DEF dipstick or a gauge. If you know you’re going to travel, you can fill it before you go and, with the right type of gauge or dipstick, you don’t risk overfilling the tank. You can carry a container of the fluid in the truck with you if you like, but the manufacturer of BlueDEF, one DEF on the market, recommends that its temperature range stay between 40 and 80 degrees Fahrenheit. It can still be OK above 12 degrees and below 86 degrees, so as long as it doesn’t get too hot or too cold, it should be fine.