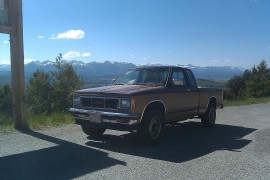 From The NY Times.

TO many people shopping for new vehicles, there is little to differentiate the trucks sold by Chevrolet and GMC beyond the logos on the grilles. But to collectors, GMC holds claim to a hard-working personality distinctly its own.

“Up until the late 1950s and into the ’60s those were mostly work trucks,” said Donald E. Meyer, 80, a GMC historian in Lake Orion, Mich. “They were used rough and put away wet.”

In its formative years, GMC catered almost exclusively to farmers, contractors and freight haulers, building a line of trucks that emphasized utility and dependability over comfort or style.

“GMC sold small trucks as an accommodation to their big-truck buyers,” said Rob English, 58, a collector in Sheldonville, Mass., who has an enthusiast Web site, www.oldgmctrucks.com. “Chevy was a car company that moved up to the light-truck business. GMC backed into it.”

Chevy trucks, which outsold GMC models by more than two to one in 2011, are easier to find on the road and in collectors’ garages. That makes GMCs, in some cases, all the more valuable. “I think the GMC brand is little more refined,” Mike Flynn Jr., owner of Hollywood Wheels Auctions and Shows in St. Petersburg, Fla., said. “It’s also a little more rare.”

The GMC nameplate first appeared in January 1912 at the New York auto show, then held at Madison Square Garden in Manhattan, after General Motors had combined several of its truck brands. A popular myth held that Max and Morris Grabowsky, brothers who in 1902 formed one of those brands, the Rapid Motor Vehicle Company, supplied the “G” in GMC. The truth is less colorful, according to Mr. Meyer: the letters simply stand for General Motors Corporation, the new company’s parent.

GMC’s early days focused on big trucks for commercial customers; the year of its first light-duty pickups is not easily pinned down. Though the company offered an Express Body truck in the mid-1920s that resembled a pickup, it had a wooden cargo box. It was not until 1936 that GMC produced what experts consider a modern pickup, an all-steel half-ton model called the T-14, which cost $566.

Early marketing campaigns promoted the durability of the trucks. In 1927, Erwin Baker, better known as Cannonball for his many high-speed motoring stunts, drove a two-ton GMC tanker filled with water from the Atlantic Ocean to the Pacific. In the course of his nearly 3,700-mile trip from New York City to San Francisco, Baker averaged 27 miles an hour over five days and 17 hours, never slowing for a breakdown.

Early GMC trucks “will drive down a two-lane back road at 35 miles per hour, and they will do it for decades,” said Mr. English, who in 2007 made his own cannonball tribute drive in a Brewster Green 1951 pickup that he restored.

“I have done a reasonable amount of long-distance travel in this truck,” Mr. English said, adding that he had the truck trailered back to New England after the trip. “I had it out of my system by the time I got there.”

GMC continued to build trucks in a variety of body styles until 1942, when production was interrupted by World War II. During the war, GMC built more than 528,000 CCKW trucks, a two-and-a-half-ton model that was commonly called a deuce-and-a-half. Soldiers would refer to this 6-wheel-drive workhorse as a Jimmy. That name was borrowed for GMC’s first midsize S.U.V., introduced in 1970 as a counterpart to the Chevrolet Blazer.

GMC’s wartime production also included more than 21,000 amphibious variants of the CCKW, called the DUKW — the so-called ducks that delivered the troops storming the beaches in the Normandy invasion. Many remain in use as tourist attractions.

By the 1950s, the transformation of the pickup from work truck to lifestyle vehicle was beginning, and the lines between Chevy and GMC began to blur. In 1955, GMC offered a new breed it called Blue Chip trucks, replacing the previous generation that began in 1947.

The restyled line included the GMC Suburban Pickup. The thickly chromed truck looked similar to Chevrolet’s Cameo Carrier, though it was powered by a Pontiac V-8 instead of the Chevy small-block V-8. For many collectors, this model is the ultimate GMC.

“They only made 1,000 GMC Suburban Pickups,” said Ralph Wescott, 75, a brand devotee in Largo, Fla., who sold a set of 10 vintage GMCs at a Hollywood Auctions sale in West Palm Beach last year.

The centerpiece of Mr. Wescott’s collection was the 1957 GMC Palomino, a one-off Suburban Pickup built for auto shows. Designers dressed it up with a gold-and-cream paint scheme and a sumptuous leather interior. Rolling on its original tires, with just 9,900 miles on the odometer, it brought $194,400.

By 1967, GMC and Chevrolet light trucks began rolling off the same assembly lines. There were subtle differences, though, including a special V-6 that GMC introduced in 1960.

“It was only used for a few years, and it was only for the GMC trucks,” said Michael Goodfellow, a GMC collector in Honeyville, Utah, who runs the Web site 6066gmcguy.org, a forum for enthusiasts of the 1960-66 era.

“The V-6 was the last generation of GMC trucks that were differentiated,” added Arthur Throckmorton, 52, an enthusiast in Las Vegas who owns a 1960 half-ton pickup that he restored.

Some blame the engine’s tough-as-nails reliability for its downfall.

“They were just too good,” Mr. Meyer, the GMC historian, said. “They were more expensive to make than the Chevy V-8s and the fuel economy was not as good, but boy, they lasted forever. I know of V-6s that went over 400,000 miles without an overhaul.”

More modern GMCs should not be overlooked, collectors say. High-performance variations like the Syclone small pickup and the Jimmy-based Typhoon have devoted followings, and the appeal of good-condition GMC pickups from the 1970s and ’80s is increasing — as is the demand for parts.

“New old-stock grilles can go for $800 for just a grille in a box,” said Jeff Drew, 38, of Coon Rapids, Minn., who runs the Chevy-GMC enthusiast site 73-87.com. “Supply and demand is kicking in, and everything is going up.”

Compared with the past, GMC today may seem as though it is in cozy retirement, offering pampering options like the Denali package, introduced on the Yukon full-size S.U.V. in 1999.

In the last decade, GMC designers have sought to break away from the brand’s image as an upscale Chevy and reposition it as “professional grade.” The company does this mainly through sheet metal changes and upscale trim.

GMC’s design studies also have forecast pickup trends. Elements of the 1999 Sierra Professional concept’s mobile-office interior inspired later designs. The 2000 Terradyne concept, whose knife-edge styling cued up the latest generation of G.M.’s half-ton pickups, was the first to carry a Duramax diesel engine and Quadrasteer four-wheel steering. Those features went into production, though the latter was short-lived.

But the brand is thriving, having jumped in sales 31 percent in 2010 and another 16 percent in 2011. GMC is its parent’s second-top-selling nameplate, and nearly half of GMC’s recent sales have gone to what the company calls conquest consumers, or buyers who would not normally consider G.M.

Jeep Unveils Two Pickup Concepts Pre-SafariWhat Percentage Of Your Truck Is Made In America?