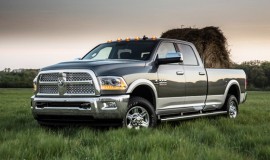 Posted by Mark Williams | May 16, 2013 from www.pickuptrucks.com

Bringing a new truck to the heavy-duty segment (three-quarter and one-ton trucks) is not what it used to be. Not long ago, it was simply about making small, incremental changes that nudged you ahead of your two competitors. As long as you offered loyal truck buyers a fair number of reasons to buy your truck (usually in the form of a slightly higher payload, larger towing number or higher gross combined vehicle weight rating), all would be fine.

But that was before Ford made a huge push to offer its own Super Duty turbo-diesel and transmission, and before GM completely revamped its suspensions and frames, not to mention upgrading its Duramax engines and Allison transmissions.

With the race to claim class-leading payloads and maximum towing capacities, the heavy-duty truck war has become as fierce as a clash of the the half-tons. It should come as no surprise that Ram is hoping to make a huge splash in the marketplace with its new 2500 and 3500 HD pickup trucks, the follow-ups to the highly successful Ram 1500 that came out late last year. Ram is coming off one of the biggest sales months ever just as the economy looks like it’s getting some color back in its cheeks. The timing couldn’t be better.

Our first look at the new Ram HDs came during last year’s State Fair of Texas, but now we’ve had the chance to get behind the wheel and finally see what this truck can do, specifically from a maximum towing and payload point of view. And we can say the efforts must have been gargantuan, because the results are that impressive.

All 2013 Ram HDs start with a completely new, much stronger foundation that uses eight reinforced cross-members sitting between roll-formed and fully boxed frame rails. The frame is stronger and wider up front, and stronger and stiffer in the back third of the platform. A massive new 12-inch-wide cross-member directly underneath the bed can be used as the support bracket for a fifth-wheel or gooseneck hitch when ordered from the factory. This is the first time Ram has offered this bed-hitch from the factory. The vastly improved and strengthened ladder frame allowed engineers to rethink the front and rear suspensions in order to improve ride quality and capacity as much as possible.

Specifically, the front suspension on all one-ton pickups will switch to a more controlled and laterally sophisticated three-link/coilover suspension with two gigantic trailering arms locating the live axle. The 2500s will continue with the existing five-link/coilover setup, but we’d guess most of the models (but not the Power Wagon) will also switch to the three-link strategy by 2014. Although there has been no announcement of any kind of air-bag suspension (so no load-leveling) coming, Ram engineers have tuned the rear leaf springs with a surprising amount of comfort when both loaded and empty. New spring rates and progressive multistage overload springs make the ride on most 2013 models dramatically different from the previous generation.

Additionally, there is a new, more massive rear axle to help accommodate the special max towing package that includes, among other things, an 11.8-inch ring-and-pinion gear housed in a wonderfully efficient, finned aluminum differential cover. But pulling heat from the axles isn’t the only place (or even the most important place) from which to pull heat.

Ram engineers knew that if they wanted to get more horsepower and torque out of the stout Cummins ISB motor, they would have to be smarter about pulling heat from the block. They’ve done that in several ways. Not only do the new Ram HDs have the biggest radiator fan you’ll find in an HD pickup, but they have twin radiators to extract tons of extra heat from the engine block. On the intake side, the new HD also tries to get the coolest air possible into the engine (for more power efficiency) by offering a segment-only dual air intake that decides where to pull air from, depending on load and need. There’s an intake cool air charger as well. It’s worth noting the intake system is smart enough to know when to pull warmer air during snow, heavy rain (or water fording) or extreme altitude climbing too, with intakes at the top of the front grille or behind the front passenger fender.

There’s more big news: All three Cummins engine are paired with a new diesel exhaust fluid injection system, rather than the expensive catalytic reduction processes used last year. This simpler way of dealing with emissions (a strategy also used with the chassis cab 4500/5500 models) improves fuel economy by as much as 15 percent and helps keep overall costs down.

But the really big news for the segment comes in the form of the maximum payload and towing capacities of the 2013 Ram HDs. According to Ram charts and calculations (see links below), a regular-cab long-bed Ram 3500 HD with all the right options will be able to carry more than 6,700 pounds of payload and tow a fifth-wheel or gooseneck trailer weighing just a hair more than 30,000 pounds. Oddly, the maximum payload number is rated with the middle Cummins and 68RFE transmission, while the maximum towing number is rated with the high-output Cummins and the stouter Aisin six-speed.

We had the chance to tow several trailers weighing more than 28,000 pounds at Chrysler’s Proving Grounds in Chelsea, Mich. (it’s illegal to tow that kind of weight on public roads without a commercial driver’s license), and found it to be much easier than we expected. The newly tuned Tow/Haul setting helps a lot with more confident takeoffs; both transmissions (the 68RFE and AS69RC) were quick to downshift and keep the engine within 1,800 to 2,900 rpm, where it seemed to have the most pulling strength. Of course, with this kind of weight all things are relative, so don’t expect Superman-like pulling strength as the computers try to make the ramp-up smooth and gentle on the important axle, transmission and driveshaft parts. At higher speeds, the front end felt vastly more controlled; in manual mode, we found the shifts quick and assured without a hint of excessive force during gear changes. However, getting a trailer this big moving at freeway speeds is only half the battle.

Quite possibly the most impressive piece of technology on the truck is the new smart exhaust brake system that allows the driver to determine how aggressively he or she wants the exhaust brake to kick in. Whether in Off, On or Auto mode, the new exhaust brake will activate to help slow the vehicle down as long as the various sensors determine the conditions are right.

The On setting is the most aggressive and delivers the most impressive jake-brake-style rumble we’ve heard from any heavy-duty; it sounds exactly like a big-rig throttling down on the interstate every time you lift off the throttle.

The Auto mode is a softer setting for the exhaust brake that considers more parameters when changing the angles of the veins on the turbocharger to slow the truck and trailer combo. The result here is quite literally a leap forward for the 2013 Ram HDs over their competition, all in the name of safer, more controlled and better-sounding towing. We like that.

With all the mechanical and structural upgrades made to the 2013 Ram HDs, it would be easy to gloss over the interior changes, mostly because they look so similar to the huge changes we saw in the light-duty Ram 1500 that debuted last year. Ram is clearly taking the same interior trim package and styling cues that made the Ram 1500 a 2013 winner in WardsAuto’s 10 Best Interiors competition. It’s an attempt to redefine what a heavy-duty truck interior should and can look like. All the same trim packages, including the impressive high-zoot Laramie Longhorn, essentially carry over to the HD lineup, giving customers many different work-truck and luxury-cruiser options. But the beauty is not just skin deep here.

Just as in the 1500, Ram engineers replaced the entire electrical guts of the HDs to accommodate a vastly improved connectivity capability. The new 8.4-inch touch-screen UConnect system, newly available in Ram HDs, offers incredible access to detailed navigation, local and national weather, customizable music, info about your favorite sport teams, movie listings and real-time fuel prices right at your fingertips. Additional information screens in the center of the gauge cluster offer info on the engine, filter life, turbocharger, exhaust brake, preferred trailers and many other details. With all these features you begin to see that these new trucks are not just better than the ones they replace, they’re trying to set a new standard. And from our first look, these are the first HD pickups we’ve driven in a long time that literally add up to something greater than the sum of their parts. We like that too.

It’s almost an impossible task to try to list or filter all the significant details about the Ram 2500/3500 from the meaningless ones — or at least the ones you don’t need to know about — because there is so much meat here. The 2013 Ram HDs are clearly better trucks than the ones they replaces, and in many areas they offer some of the best features in the segment, but they aren’t necessarily the perfect truck either. As noted, we still don’t have a load-leveling suspension; we still don’t have a way to see what gear our transmission is in unless we shift manually; and we still don’t have a Ram Long-Hauler ready to create a new breed of tow king.

However (fingers crossed), we’re told that there will be even more important changes for the Ram HDs coming in the 2014 model year. Normally, we’d think this was just an attempt to blow smoke up our backsides about new paint colors and trim packages, but from what we’re hearing from several industry sources, we think Ram may be holding a few big surprises for next year. What exactly that means we’re not sure, but we hope it looks something like the new Ram HDs, just more of them. We know the Ram 1500 will get the little diesel engine option soon; the Ram ProMaster full-size van is just around the corner; and now we can expect some added upgrades for the Ram HDs for the 2014 model year. We’re guessing we’ll hear more by the time we get to Chrysler’s What’s New event later next month.

For now, this is what we know, but it seems like we need to put together another Heavy-Duty Hurt Locker test with new Ford and GM offerings. We’ll keep you posted.

May 26, 2013By pickuptruckadventures2500HD Dodge News RamLeave a comment
Dodge Ram