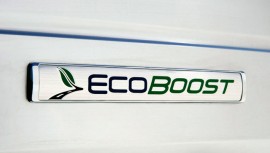 Posted by Mark Williams | May 20, 2013 Story from www.pickuptrucks.com

At least one aspect of Ford’s EcoBoost engine is a bust, according to a lawsuit filed by three vehicle owners, Automotive News reports.

The suit, filed by three vehicle owners in U.S. District Court in Columbus, Ohio, contends the EcoBoost 3.5-liter V-6 engine can misfire and rapidly lose power because of moisture in the intercooler. The suit contends the problem can effect all EcoBoost engines — two of the plaintiffs own a Taurus SHO and one has an F-150 pickup — and that the National Highway Traffic Safety Administration has received dozens of complaints.

Ford told Automotive News it had not reviewed the suit and therefore would not comment.

May 26, 2013By pickuptruckadventuresEcoBoost F-150 Ford NewsLeave a comment
EcoBoostFordFord Truck