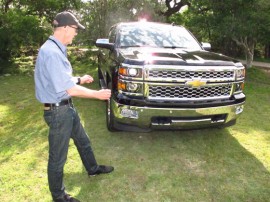 Posted by Mark Williams | May 23, 2013 Story from www.pickuptrucks.com

With the recent introduction of the 2014 Chevrolet Silverado 1500 and new-truck sales figures on the upswing, you’d think General Motors has several solid reasons to be optimistic. But cautious optimism may be a better position given the choice GM made long ago about whom to put in charge of the interior and exterior design of new trucks.

There’s no question Tom Peters, lead designer for Chevy’s performance-car and full-size truck design studios, understands what it’s like to tackle an important project. In fact, at the same time his crew was putting the finishing touches on the new Silverado, he had another team finishing up the highly controversial 2014 Corvette Stingray. Some have said the new Stingray has no right being “too wild” and “too European” as Chevy’s premiere high-performance sports car.

According to Automotive News, Peters was cognizant of the fact that Chevy truck buyers — who are very different from Corvette buyers — weren’t looking for flashy, wild or crazy new designs. They were more concerned with function and getting a higher level of overall refinement out of their next truck, according to Peters.

That all makes sense to us, but we’re not sure why that wouldn’t apply to any manufacturer that makes pickup trucks. Those focused Stingray comments certainly shouldn’t have restricted Peters from pushing a few boundaries and trying some more interesting design with a little more personality in terms of the 2014 Silverado.

During his design walk-around at a recent press introduction of the new Silverado, Peters said the guiding image for the new face of the Chevy half-ton was a “fist in the wind.” Interestingly, as we recall, this is exactly what current-generation Tundra designers described when it was introduced six years ago. To date, the harshest critics of the 2014 Silverado have described the subtle grille changes as being more like a soft slap in the face.

Peters shared his thoughts about the new front-end design, which designers discussed, debated and reshaped to improve and more cleanly refine the overall front look of the Silverado.

Surprisingly, the grille was not his favorite part, although he clearly appreciates the wider and sturdier look. His favorite focal point was how the front fenders and fender wells interact with the stacked headlights (we were looking at the High Country trim package at the time), and the wraparound bumper at each front corner. The bulging fender lines in particular are interesting, he noted, because the sheet metal actually folds into the body — although from a distance it looks like the whole fender bulges out from the body.

During his 30-year career at GM, Peters also has been involved with the Corvette Indy concept in the late 1980s, the Pontiac Aztek in the early 2000s, the Cadillac Sixteen concept in 2003 and the Chevy Camaro in 2009.

Whether the 2014 Silverado design becomes one of his huge or mild successes, Peters seems quite comfortable allowing others to decide its success for themselves. For now, it’s probably not such a bad thing that the Silverado had a designer who wanted to stay as true as possible to its loyal customers; however, if we had to guess, he allowed his team to “play” a little more with the 2014 GMC Sierra. We’ll know more about those details later this month when get our first chance to drive it.