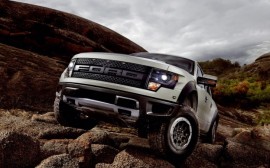 Ford will offer some unique upgrades for its off-road terror, the F-150 SVT Raptor, in the 2013 model year.

According to Ford, the truck will offer an industry-first—beadlock wheels direct from the factory. Beadlocks allow the driver to secure the edges of the tire to the wheel by clamping the tire between the wheel and a beadlock ring kit from Ford Racing. Once the wheels are locked to the tires, the driver is free to lower tire pressure for increased traction in certain conditions.

Also available will be HID headlamps and a new earth-tone, desert-camouflage-inspired exterior color called “Terrain.” No pricing on the options has been announced.

DEARBORN, Mich., June 26, 2012 – Ford is delivering higher levels of capability in the new 2013 F-150 SVT Raptor, answering the call from off-road enthusiasts for even more performance.

The latest Raptor features available industry-first, direct-from-the-factory forged-aluminum conventional wheels that can be upgraded after purchase to extra-capable beadlocks, plus other functional improvements. These include available high-intensity discharge HID headlamps that are brighter and whiter than standard lamps, significantly expanded connectivity features and Terrain, a new earth-toned exterior color.

SVT Raptor sales are up 20 percent in 2012, breaking last year’s record in the January to May period.

Raptor’s newly available forged wheel combines the proven reliability of a conventional wheel with the capability to convert to a true beadlock wheel.

Beadlock wheels secure the edges of a tire to the wheel between two surfaces so the tire is unlikely to roll off the rim if it’s aired down to very low pressure, providing extra grip on the trail.

Raptor’s wheels are unique because converting from conventional rim to beadlock only requires that customers unbolt the standard outer decorative ring, dismount the tire from its regular position and then remount the tire in the lock-enabled position with the available beadlock ring kit from Ford Racing.

This marks the first application of a wheel that has both conventional and beadlock-mounting abilities – a solution so innovative that Ford has filed for a patent on the system.

“Raptor’s exclusive beadlock wheels give the customer the best of both on- and off-road worlds,” said Adam Wirth, SVT chassis engineer. “Tire inflation can be dropped to a very low threshold for maximum traction under extreme conditions, yet holds tight – and stays tight – when returning to the road.”

SVT Raptor can be specified with an available voice-activated Navigation System using the 8-inch screen and SD-card capability for map and points-of-interest storage.

A rear view camera is available as well.

SVT Raptor is equipped with standard unique leather and cloth-trimmed seats, with driver’s side power actuation and six-way adjustability. These seats feature Raptor-specific bolsters to keep the driver and first-row passenger firmly in place, regardless of terrain conditions.

SVT Raptor can be ordered with an optional Luxury Package, adding numerous comfort and convenience technologies. In addition, SVT Raptor can be specified with an interior color accent package, featuring contrasting blue against a black environment and real aluminum trim components.

Cloth-trimmed sport seats are available to government and fleet buyers.

Since launching as a 2010 model, the Ford F-150 SVT Raptor has set the benchmark for low- and high-speed off-road performance.

Building on this foundation, SVT engineers expanded Raptor’s footprint for 2011 with a four-door SuperCrew model, joining the two-door SuperCab original.

A Raptor development imperative has been to continually improve off-road prowess in every dimension, from rock-crawling to hammer-down desert-running.

Last year, Ford began offering a front grille-mounted camera to improve driver visibility when climbing over rocks and other obstacles that might be obscured by the front of the truck. The camera transmits the captured image via the center stack-mounted LCD screen. A washer function helps keep the camera’s field of vision clear in wet and muddy conditions.

The 2012 model year saw Raptor add a Torsen® limited-slip differential to the 4WD system enabling the truck to balance traction between both front wheels. If the left front wheel loses traction, the system forces torque to the right front wheel, and vice versa. The system is optimized to help minimize steering kickback when navigating challenging surfaces.

The SVT Raptor is available exclusively with a 6.2-liter V8 engine, producing best-in-class 411 horsepower and 434 lb.-ft. of torque, mated to an electronic six-speed automatic transmission with tow/haul mode and SelectShift Automatic® functionality. The 4WD system features electronic shift-on-the-fly capability for the transfer case.

The front axle features the Torsen differential with 4.10 to 1 gearing. The rear axle is also 4.10 to 1, with an electronic-locking differential.

GM Shows 2014 Silverado Out TestingWill Silverado and Sierra get a V-6 Turbo when GM’s next-generation pickups roll out?