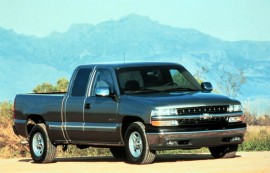 Story From pickuptrucks.com
By Gary Witzenburg

(Editor’s note: In honor of the fact that GM will be coming to market with an all-new light-duty pickup truck next year, we thought we’d take a look back at the two most recent versions of the Chevreolet Silverado model–the GMT800 and GMT900. Enjoy.)

In 1996, Chevy’s C and K  pickups — aka GMT400s — remained GM’s best-selling vehicles. That same year, they got a new family of Vortec engines: a 4.3-liter V-6, 5.0- and 5.7-liter small-block V-8s, and a hulking 290-horsepower, 7.4-liter big block. All of them were more sophisticated and more powerful than the aging workhorses they replaced.

The GMT400s boasted better electronic controls, extended maintenance intervals and second-generation onboard diagnostics (OBD II), and they were smoother and quieter thanks to redesigned accessory-drive systems and other noise-reducing measures.

The next year came a front-passenger airbag, Electronic Variable Orifice power steering and a tighter-turning radius for K1500s. In their last year before bowing to the all-new GMT800 pickups, the 1998 C/Ks were further upgraded with a Passlock security system, a new electronically controlled torque converter clutch and lower rolling-resistance tires.

All-New Silverados
Then came arguably the most substantial upgrade of Chevy’s full-size pickup line since World War II. To reflect their newness, the C/K’s long-running top-trim-level Silverado badge was applied across the board. “The launch of Chevy’s new 1999 Silverado full-size pickup – the single highest-volume product GM offers – can be summed up in four words: bigger, faster, stronger and smarter,” crowed the press release.

“Silverado is the epitome of the Chevy Truck brand image,” Chevrolet Marketing General Manager Kurt Ritter said. “It takes quality, dependability, performance and comfort to a whole new level.” These new trucks were designed to build on the reputation of the C/Ks as “the most dependable, longest lasting” full-size pickups on the road, with “the highest resale value, the best long-term quality and the most satisfied owners,” Ritter said.

Frame and Suspension
The 1999 Silverado’s new three-section hydroformed frame was lighter, stiffer and easier to build, and it allowed each section – front, middle and rear – to be engineered and manufactured to maximize performance. That enabled improvements in almost every component attached to it — from suspension to body to powertrain — for better ride quality, handling, body fits, crash performance and noise, vibration and harshness (NVH).

Powertrain and Electrics
The three available Vortec V-8s – 4.8-liter 4800, 5.3-liter 5300 and 6.0-liter 6000 – got a new valvetrain, redesigned pistons, a more rigid cast-iron block and improved lubrication, cooling and sealing. Each delivered more power and a flatter torque curve, along with reduced emissions and better NVH.Both five-speed manual and four-speed automatic transmissions were upgraded, and a Tow/Haul mode for the automatic allowed the driver to change shift patterns while towing or hauling to keep the transmission cooler and reduce shift “busyness” on hills. Also new was Autotrac four-wheel drive (standard on the top LT trim and available on midrange LS models), which automatically transferred torque to the front axle whenever rear-wheel slip was detected.

The new electrical system was a greatly simplified Class II architecture that reduced wiring to a minimum through a Bussed Electrical Center that centralized connections, protected them from corrosion and made them easier to service. New exterior lighting provided daytime running lamps with automatic lamp control, and a Z82 Trailering Special Equipment Package added plug-in connectors for trailer lighting and electric trailer brakes.

Refined Interior
Not only was the ’99 Silverado’s cabin larger than the C/K’s for more room and comfort, it was also quieter and more refined. “Back in the 400 days, our lineup was largely regular cabs,” says Jeff Luke, who worked on C/K production at GM’s Oshawa plant in Ontario and became the Silverado’s chief engineer by 2004. “Then people started looking at pickup trucks, especially with extended cabs, as lifestyle vehicles, and the 800 changed the game.

“We said we can make a truck a desirable product for peoples’ lifestyles, a family vehicle that offers all kinds of versatility along with capability and performance. There was a big focus on refinement, along with reducing mass and upping capabilities, and we went to the fully boxed, hydroformed frame, a breakthrough technology that increased stiffness, took out a lot of mass and improved ride, handling, steering and NVH,” Luke said.

Chevy touted the 800’s design, development and manufacturing processes as the most thorough and most computerized in GM history. Build combinations and parts counts were reduced, the latter between 170 and 300 per truck (depending on model) despite higher content, and all assembly plants used identical tools and processes for improved quality.

Continuous Improvement
The outgoing C/Ks remained in production for fleet sales during the 1999 and 2000 model years, and the GMT800s continued the tradition of annual improvements. For 2000, the small-block V-8s delivered more power and torque, and an optional driver-side fourth door was offered on extended cabs. For 2001, traction control for two-wheel-drive models and a composite box for four-wheel-drive 1500 extended cabs were offered, and GM’s OnStar service became standard on top-line LT models. The 6000 V-8 was boosted to 300 hp and 360 pounds-feet of torque. The next year brought a new 1500 HD model, multiport fuel injection (for California emissions) on 4300 V-8s, standard automatic transmission on extended-cab models and, on some models, optional Quadrasteer, which turned the rear wheels opposite the fronts for a tighter turning circle at parking speeds and in the same direction for added stability at higher speeds.

“We were very proud of that Quadrasteer,” Luke says. “It was a great technology that reduced the turning radius fairly dramatically, a great thing for a large vehicle. It was fairly costly, and consumers at the time didn’t gravitate to it, but everyone who bought it loved it.”

That year also saw the introduction of a high-performance Silverado SS, a monotone-painted extended-cab short-bed 1500 powered by a high-output LQ9 version of the 6000 V-8 that pumped 345 galloping horses and 380 pounds-feet of pavement-wrinkling torque through a full-time viscous all-wheel-drive transfer case. Available in black, red or metallic blue, the Silverado SS rode on 20-inch wheels and tires on a lowered and stiffened Z60 high-performance chassis package.

The hybrid powertrain boosted fuel economy up to 10 percent. “That was the first execution anywhere of that type of technology,” Luke said. “It shut off the engine when you were stopped and provided AC outlets in the cab and in the box, very useful for contractors and other folks that wanted to use the truck for that kind of thing.”

Even in its final year, the GMT800 produced some pleasant surprises, including a new grille design and a power-dome hood. To enhance the towing capability of four-wheel-drive 1500 extended- and crew-cab models, a new VortecMAX Performance Package combined a high-output 345-hp 6000 V-8 with a heavy-duty trailering package. An all-new Duramax 6600 turbo-diesel V-8 (good for 360 hp and a breathtaking 650 pounds-feet of torque) driving through an equally new Allison six-speed automatic debuted in HD Silverados. Availability of the hybrid expanded to nationwide, and the SS package became available on two-wheel-drive trucks. A special Intimidator SS version was also offered to honor the late NASCAR driver Dale Earnhardt.

Thus was the stage is set for the next-generation Silverado, the GMT900. Stay tuned for Part II.