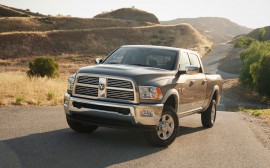 From the October, 2011 issue of Motor Trend
By Allyson Harwood
| Photos Motor Trend Staff
At Motor Trend headquarters, where there are always hot hatches and sports cars lurking about, having a big pickup can go one of two ways. One possibility is it gets totally ignored, as people choose to drive vehicles that are faster and better suited to canyon roads. The other — and what we observed to be the case with our 2010 Ram Heavy-Duty 2500 — is that, because it’s one of the few vehicles in the long-term fleet ready do work at a moment’s notice, the big pickup is always busy.

We first discovered the Ram’s civilized nature at the 2010 Truck of the Year testing, where the Ram won because of its impressive capability and refinement. As the TOTY winner, it earned a spot in our long-term fleet. One of the biggest improvements the manufacturer made was to the cab. Plenty of sound-deadening material was placed throughout, and the interior was redesigned. The Ram scored big points for its nicer leather, plastics, and fabric, more attractive layout, and very comfortable seats. In addition, despite the cabin’s large dimensions, drivers of all sizes could easily find a comfortable seating position and had no trouble with visibility. It was a big enough change from the cabins of past Rams that most of us noted the difference. We also liked the creature comforts, including the heated steering wheel and easy-to-use driver-information center. The ride quality added to the comfort level. While a large pickup, it’s easy to maneuver, and its a turning radius is better than expected for something this size. Associate editor Scott Evans logged that the Ram is “a monster on L.A. streets, but drives like a full-size sedan.”

That was precisely what happened here. The Ram took runs to Mammoth Mountain, helped friends and family move, and hauled furniture. Executive editor Edward Loh wrote that the truck can hold a near-ridiculous amount of gear: “The cab is enormous. We were able to stuff six bags of gear (two sets of snowboard boots and clothes, two overnight bags, a backpack of climbing gear, and some food), a long case with two snowboards in the rear seat, and a case of beer from Indian Wells Brew Co. No problem.” Some also used the Ram to tow project cars and trailers full of gear — in at least one case, across multiple states.

Everyone heaped praise on the Cummins inline-six turbodiesel, which produced 350 horsepower and 650 pound-feet of torque while averaging an impressive 14 mpg overall, and closer to 18 mpg on the open road. It also propelled our truck to 60 mph from a stop in 8.4 seconds and through the quarter mile in 16.4 seconds at 84.2 mph. Evans’ notes continued, “The big Cummins I-6 turbodiesel (same displacement as Ford’s new diesel V-8) may not be the most powerful engine available in a heavy-duty rig, but I love it. It’s smooth and so willing. When driving down the road with an empty bed, a gentle nudge on the throttle releases a wave of torque that surges the truck down the road much more quickly than you’d expect for a vehicle this size.”

There was no amount of work this truck couldn’t handle, and some regretted not having tough enough chores for the Heavy Duty. As art director Mike Royer pointed out, “It’s just not fair to the truck. That’s like having a greyhound you never let run.”

There were some quibbles. The 4WD 3/4-ton is tall, and the lack of side steps made the Ram tough to climb into. We corrected that by having a set of Mopar side steps installed. It was an item we should’ve had in the first place, and made a huge difference. The staff also wished the truck had something like Ford’s “man step” (GM’s term) to make it easier to get into the bed and load gear all the way to the back of the cab. Also, at certain times of day, the chrome interior accents created a lot of glare. But the biggest problem was that several staffers were disappointed in the build quality. A piece of weather-stripping along the rear window came down during our test. We heard minor rattles from the center console storage lid and from one of the speakers. (And everyone would like to see Chrysler invest in a new navigation system for all of its products.) The question is whether these problems were inherent in the Ram product line or are things that plagued only our tester.

With no significant service issues for the duration of our long-term test, the total cost to maintain the Ram was $1045.49 for three services. The first two trips included an oil change, tire rotation, and full inspection, and each cost less than $200. Its 15,000-mile visit, included the aforementioned services, plus a fluid change in the front and rear differentials. That service cost $735.61.

By the time we had to give the Ram back, it had established itself as what we’d hoped would be a permanent part of our long-term fleet. But that isn’t how the system works, unfortunately. We had to accept that our trusty hard-workin’ pickup was moving on.

“For a guy with recent lower-back soreness, the Ram seats are magical. I spent five hours nonstop in them and had no soreness. If Ram knows anything, it is long-haul trucking comfort.”
Edward Loh

“The best part is the smooth Cummins inline-six. Though not the quickest off the line, once it gets up to speed, it moves with surprising urgency. Passing maneuvers will certainly not require any extra care beyond making sure there’s enough space for a semi tractor to fit, since this truck is about the same size.”
Kirill Ougarov

“Our Ram, by my rough estimate, is about 27 feet off the ground. I jump to get in, which is fun-like climbing into your first lifted truck when you’re a kid.”
Carlos Lago