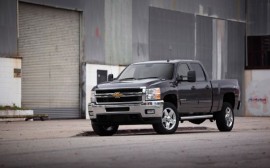 I’m starting to come to terms with the fact that I have a lead foot. It isn’t completely my fault, though — the power comes quick and easy in the Silverado. Around town, this isn’t as much of a problem. My weakness is when I get on the freeway. Look, where I get on the freeway, the on-ramp lane merges and ends; it isn’t the type where if you can’t get over, you get off the freeway and try again at the next one. So, in that narrow stretch of vanishing road, I do what we all do when merging with traffic at freeway speeds — you find your spot and line up for it.

The leadfootedness (I know it isn’t a real word, but what would you call it?) gets worse when I’m on the freeway. A light application of the throttle, and I’m speeding. Again. Without even trying. The up side is that I notice it quickly enough that I get back to driving with the flow of traffic. What’s nice is that an extra safeguard against my doing something even more stupid (and unsafe) is the truck’s excellent visibility. It already provides a great view of the road, and the generous side mirrors help even more. What was really amazing, though, is that (as I mentioned last month) lots of other people drove the Silverado; I’ve been driving it almost exclusively this time around and, despite my heavy foot, the fuel economy has been identical to what it was with other drivers. And I know that if I slowed down, not only would fuel economy get even better, but I wouldn’t be so nervous when I see a CHP officer getting on the freeway.

In other news, as mentioned last month, the truck went in for its first service. I took it in when it had about 8400 miles on the clock. While it was at the dealer, I asked the technicians to take a look at (and listen to) a clunking sound I hear every time I back up slowly. The dealer also knew of a recall on this made, model, and year truck, so taking care of that was also on the To Do list. The Chevrolet dealer changed the oil and filter, inspected the hoses, and rotated the tires. The recall involved reprogramming the ECU, which was a fairly quick fix. The guys needed some extra time to pinpoint the cause of the rear-end clunk, and by the end of that business day they heard it, but still hadn’t diagnosed it. They offered me a loaner, free under the truck’s warranty. Did I get stuck in a subcompact with a mini-spare? Nope. A bicycle with streamers on the handlebars? No, sir. They handed me the keys to a Suburban. Not a bad vehicle to borrow! The guys figure the cause of the clunking noise was something in the rear suspension, which they lubricated. That seems to have solved the problem, for now, and I am back in the truck. Remember that missing end cap on the side step? The dealer says that I can order a new one — for only 30 bucks!