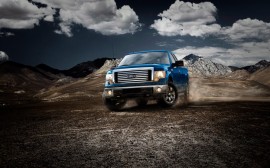 The Messages from TV news, newspapers, and web feeds are about as mixed as you can imagine. Fuel prices look to hit record highs in the coming months while construction starts are finally beginning to move in the right direction. Ad to that four solid months of strong automotive sales growth and there could be a few reasons to be optimistic about the economy. Still, less expensive, small car sales are leading the way, as some are reporting overall truck sales are likely to decreased month-over-month for the segment, just as they did last month.

Ford sales analyst Erich Merkle said pickup trucks are expected to account for about 10.5 percent of U.S. auto sales in February; down from 11.0 percent in January and 13.5 percent in December 2011. If February sales were to be annualized, the total number of vehicle sales by year-end would likely reach 14 million units.

We’ve provided the Top 15 here this month. Take note of the two vehicles (*) that are no longer in production but are still being sold (Ford Ranger and Dodge Dakota).

What Percentage Of Your Truck Is Made In America?Cadillac’s Electric Self Starter Turns 100